A man called Hawk leans against the wooden grooves of the aviary barn. He wipes the sweat from his face, and blood from his arm after enduring a gash while capturing a rescued blue heron to be released back into the wild. He’s committed to helping the animals have another chance at life.

“That’s the best part of it all, when you turn them loose, and you watch them fly off,” Don “Hawk” Ross said. “That’s when you know you’ve done your job.”

Nature World Wildlife Rescue (NWWR), a rescue and release sanctuary, is currently caring for about 50 animals. Last month it released 15 animals back into the wild; so far this month, it has released seven more.

The job goes unpaid, though. Ross volunteers his time seven days a week at the sanctuary, caring for and transporting animals using his own gas. Days spent volunteering easily turn into nights. 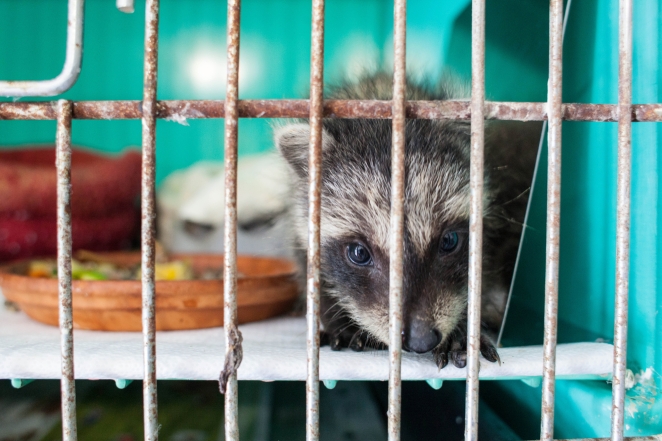 On his way home after releasing the blue heron and an osprey, Ross received a call to pick up another injured animal.

“Sometimes I don’t get out of here until 10 o’clock at night,” he said.

Mary Opall, director of NWWR, believes Don Ross is the answer to her prayers. She, too, was volunteering her time seven days a week running the facility — until Ross walked in. His help has allowed Opall to have a day off each week.

“We couldn’t get along without Hawk,” Opall said. “He gives so much of himself … his time, his energy, and knowledge as well.”

Ross says wildlife has always seemed to like him, ever since learning to track and handle animals on his grandfather’s farm.

Nature World is a nonprofit run entirely by volunteers. They are relied on for rescue by the Florida Fish and Wildlife Conservation Commission, U.S. Fish and Wildlife Service, and Citrus County Animal Services, yet receive no government funding. They get calls to transport and care for animals in multiple surrounding counties.

They desperately need the help and support of the community, Opall said. They are accepting volunteers, monetary donations and supplies. Monetary donations can be made at natureworldrescue.org/donations. Donations of medical supplies, towels, laundry items, gas cards, cleaning supplies, carriers, newspapers, etc., can be taken to a veterinary clinic with “Nature World” clearly marked on the container. Donors can also call 352-621-5575 to schedule a pickup.